Ives Lake has 470 acres of surface water, 110-foot depths, and a rock mountain. Its frontage is shared by four owners. This Huron Mountain area was identified by the National Park Service as one of four with “national significance” in the Great Lakes Basin. The other three: Indiana Dunes, Sleeping Bear Dunes, and Pictured Rocks all became National Parks. The cabin has cedar walls, cherry floors, granite counters, TV, and the Internet. It was designed by a Boston architect and upgraded to Code. Cherish privacy and security minutes from town in year-round comfort. Tell tall tales by the big stone fireplace, sun on the beach, listen to loons. Hike to dramatic overlooks with long views over Lake Superior and the Huron Islands. The beach is fine sand. The view is westerly to sunsets. This warm and welcoming cabin sleeps six. Shop and dine or ride world-class mountain bike trails, used year-round, in Marquette. Seven Pines is inside the guarded gates of the 35 square mile Huron Mountain Club. This is the only home you could buy on a major lake entirely within the Club since its creation in the 1800s.

The Huron Mountains northwest of Marquette, Michigan, are a wonderland of high rock faces, stone outcroppings, sugar maple forests, monarch white pine, waterfalls, and blue mountain lakes. These rocky hills are the remains of an ancient mountain range that once reached as high to the clouds as the mountains in Tibet. Now eroded and scarred by glaciers and time, they remain majestic and beautiful. This is scenery reminiscent of the mountain west and it is a surprise to find it in the Midwest.

Seven Pines has been our personal camp for 20 years. I was captivated and bought it as quickly as I could two days after I first visited the property. Sometimes it’s good to move quickly. Almost before the ink on the purchase offer was dry there were other disappointed prospects. Our property fronts on Ives Lake, one of the largest natural lakes (a lake not created by a dam) in Michigan. Directly across the lake, framed in our view, is the largest rock mountain I’ve seen in the U.P.

Our frontage and forest acreage lie two miles inside the guarded gates and 22,000 protected acres of the legendary Huron Mountain Club that surrounds us, 26 miles north of Marquette. We are inholders, not members. The Club’s existence spans more than 125 years, and many members are direct descendants of the Club’s founders. The property includes thousands of acres of old-growth forest, 10 inland lakes, 11 miles of Lake Superior shoreline, and several trout streams. Access is through the main gate of the Club, which is manned 24 hours a day. The Club is timbered with magnificent old-growth pine, hemlock, and hardwood forests, portions of which are visible from the entry road.

The book Huron Mountain Club: The First Hundred Years tells us that Ives Lake was purchased by John Longyear, a “Landlooker”, who conceived and was the President of the Huron Mountain Club for the first 33 years. Longyear had purchased most of the Club’s lands but “set aside for himself” Ives Lake and surrounding lands in the late 1800s. Longyear and his heirs owned it all until nearly all of it was sold to the Club. Besides the Club, there are now just three other owners, all on the eastern shore. Two are heirs of J.M. Longyear. The third is our parcel, which was owned by one of Longyear’s sons.

In 1960 the National Park Services studied the Great Lakes Basin to find the remaining lands of national significance. They identified four that met that description: Indiana Dunes, Sleeping Bear Dunes, Pictured Rocks, and the Huron Mountains. The first three were judged to be in more danger of development and therefore became higher acquisition priorities for the Park Service. These three are now national parks. The money ran out and the Huron Mountain National Park was never created.

We believe our property is the best private land in the Huron Mountains and perhaps in Michigan’s Upper Peninsula. It is as fine as any of the thirty-five square miles of land owned by the Huron Mt. Club that surrounds us, land often called the finest undeveloped tract of recreational land east of the Mississippi.

Our land includes 15.85 acres on Ives Lake, which is named after the first surveyor of the land. In the words of Ted Bogden, “Ives Lake is mythical, historical, and steeped in lore.” There are many lakes in the Upper Peninsula and some of them have character. Ives Lake is one of these. In 25 years of looking at lake properties, I have never seen one I’d rather own.

A stand of large red pines surrounds the cabin. Back from the shore are white and yellow birch, large white pine and hemlock, hard (sugar) and soft (red) maple. Birdseye maple has been found on the property. The beach is fine sand. Spectacular views to the west center on Ives Mountain rising 500 feet above the surface of the lake. Dramatic granite cliffs line the north and northwest shores. Ives is a fabulous lake for canoeing, kayaking, or a rowing scull.

It is a rugged mountain lake, the 2nd largest natural lake in Marquette County with 470 acres of surface water and depths to 110 feet. The largest Marquette County lake, Mountain Lake, is also inside the borders of the Huron Mt. Club. Four species of trout inhabit Ives Lake: Kamloops rainbows, brook trout, brown trout, and a large reproducing population of native lake trout. One of the two species of lake herring is said to be unique to this lake. There are also large perch. Under Michigan law, this lake is open for fishing year-round. We prefer to use barbless hooks and practice catch and release. We have unrestricted use of the lake for ourselves and our guests.

We enjoy no right of use of the Club lands and respect the Club’s privacy, as they respect ours. Adjacent to the east and extending nearly 50 miles to the west lie vast Longyear, Plum Creek, Heartwood Forest, and other logging company lands, all in CFA, a virtually unbroken forest tract with well over 1,000 square miles. These lands are open to our use and are remote and rather difficult to find for anyone that does not know the two-track roads.

Our three-bedroom, 1,568 sq. ft., cedar shingle-sided camp was originally built in 1957. We completely rebuilt it to code in 2000 with the help of a Boston architect and an exceptional local contractor. The interior is cedar, fir, cherry, and pine. It has a massive stone fireplace, two bathrooms, two bunk rooms, and a master bedroom. We expected this to be our guest house at some point and planned to build a retirement home in a nearby grove of large red pines. You may or may not choose to do that. We found that this warm and welcoming cabin fully meets our needs, and you may too. 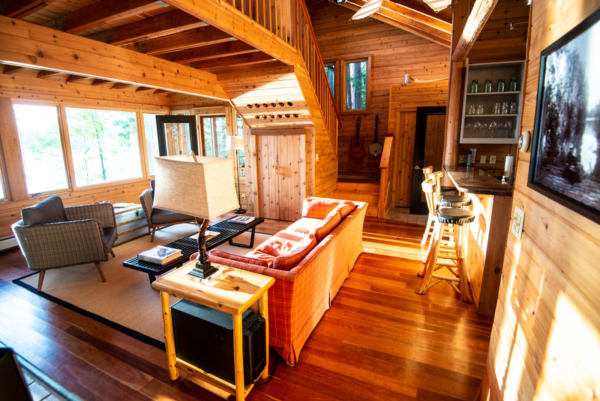 It is relaxed and comfortable. Utilities include underground electric power, hot water heating, a six-inch 110-foot deep-drilled water well, propane gas for furnace and kitchen stove, unlimited hot water, and a septic system completely rebuilt in 2005. A Kohler generator with an automatic switchover provides seamless emergency backup power. The full-service kitchen has a dishwasher, compactor, and native granite counters. You just bring food, clothing, and footwear suitable for the woods, a book for rainy days (we love them here), and yourselves.

This is attractive, low maintenance, wilderness camp with world-class views. The extraordinary feature of this property is not the structure. It is the land and location, that large and wonderful lake out front, spectacular views, and vast surrounding lands that provide such exceptional privacy. This may be the ideal place to write that book, paint, and photograph nature.

Wildlife is abundant. Whitetail deer, black bear, eagles, osprey, loons, sandhill cranes, grouse, marten, fisher, and an occasional moose or black bear live here. We had a flock of trumpeter swans for several years and have seen great horned, barred, and snowy owls. There is a fine warbler migration that passes through in spring and fall. You will see or hear these and others and, if you are lucky, perhaps a wolf.

Marquette, the largest city in the U.P. by four times, has a regional airport that offers jet service on some of the longest runways in the world, built to accommodate B-52’s when K.I. Sawyer was an Air Force base. It has a regional hospital with more than 200 physicians, Northern Michigan University with Division I sports (hockey), and a wide variety of city services and cultural attractions. The Village of Big Bay six miles southeast of our camp has supplies, a restaurant, a fine harbor of refuge and mooring basin on Lake Superior, and a launch ramp on Lake Independence for your sail or powerboat.

If you use this camp as a base of operations to wander around the U.P., as you should, you will find plenty to do. 35 minutes to the south Marquette has great restaurants, supplies, and city services. 45 minutes east of Marquette, Munising is the home base for the Pictured Rocks National Lakeshore, Grand Island (administered under the National Park Service), and the Hiawatha National Forest. Houghton, Michigan Tech University, and the Keweenaw Peninsula are an hour and 45 minutes west of Marquette.

Fly fishermen, or those who would like to be, will find mayfly hatches and rising trout out front, and an hour’s drive south of Marquette there’s a wide river with wadable, fast, western-type water, prolific hatches, and plentiful if wary big trout. It’s a poorly kept secret. This is the U.P.’s best quality trout water with a catch-and-release year-round season. The fishing is comparable to the Madison, Yellowstone, or Big Blackfoot out west. We’re talking 14 to 20-inch browns and brooks as average fish and yes, there are some that run to eight or ten pounds. Catch them if you know how.

This is a comfortable cabin in a perfect wilderness setting, a rare and protected piece of the way things used to be. It has been a sanctuary for us. It can be a place for you and your family to build traditions by a beach fire under Northern Lights, in the heart of some of the most spectacular wild land in America. We look forward to sharing it with you.

Disclosure: Dick Huey is a Michigan Real Estate Broker. This property was purchased 20 years ago for personal use and investment. 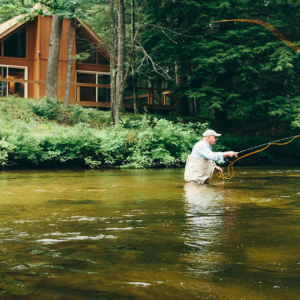 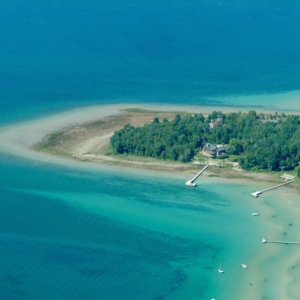 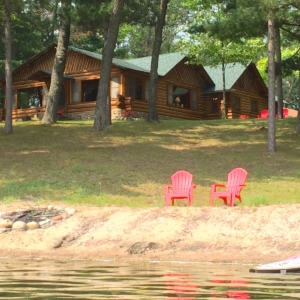